Duration: (12 Nights | 13 Days)
Destinations Covered: Bagdogra, Phuntsoling, Thimpu, Wangduephodrang, Trongsa, Bumthang, Wangdi, Paro | Ex Delhi
Best Period : March to November
Day 1: DELHI / BAGDOGRA
Morning, transfer to the domestic airport in time to board flight for Bagdogra.
Meeting assistance on arrival at the airport and drive directly to India’s border town of Jaigaon (170 kms/4 hrs). You will be met here by our representative, who will assist you with the immigration formalities and transfer you to the Bhutanese border town of Phuntsholing, which is just a few minutes away. Overnight in Phuntsholing.
Day 2: PHUNTSHOLING / THIMPU
Breakfast at hotel
Visit the famous Karbandi Monastery – your first introduction to the esoteric Vajrayana Bhudhism that is all pervasive in Bhutan. This is a rather new monastery with a picturesque setting.

Later drive to Thimpu, (176 kms/06 hrs)
Thimpu, the capital of Bhutan since 1960, lies at an elevation of over 7600 feet in the fertile valley of the Thimpu Chhu River. The wooden houses stand side by side with concrete buildings, all painted and constructed in the traditional Bhutanese architectural styles.

Late afternoon, (if time permits) visit the Motithang mini zoo to see the rare “Takin”, the National animal of Bhutan. Overnight in Thimpu

Day 3: THIMPU / WANGDUEPHODRANG
Breakfast at hotel.
Morning: Drive to Wangduephordrang (70 kms/3 ½ hrs) through some of the finest mountain roads with beautiful views of the mountains and exotic mountain flowers.
Wangduephordrang – This is the last town on the highway before entering Central Bhutan. Sitting on top of a hill, the formidable Dzong is the town’s most visible feature. In the 17th century Wangdue played a critical role in unifying Western, Central and Southern Bhutan.
Arrive Wangduephordrang by the middle of the day and before getting to the hotel, visit the Wangduephodrang Dzong. The town is no more than an enlarged village with a few well-provided shops. Continue the last leg of the journey and check into the Resort.
Rest of the afternoon relax at the Kichu Resort, located on the banks of a gushing river – an idyllic setting. Overnight in Wangduephordrang.
Day 4: WANGDUEPHODRANG
Breakfast at hotel
Morning drive for (45 minutes/15 kms) to Punakha and visit the Punakha Dzong, which served as the old capital of Bhutan. This remarkable fortress was strategically built at the junction of the two rivers in the 17th century by the first Shabdrung to serve as the religious and administrative centre. It also houses sacred temples including the Marchen where the embalmed body of Shabdrung Ngawang Namgyal, the `Great Unifyer’ and the founder of Bhutan, lies in state. The Dzong has been fully restored by the present King. Every year during the month of February a procession known as the Punakha Serda takes place to commemorate the victory of Bhutan over the Tibetans.
On your return, walk across a paddy field to make your way to a very interesting chapel, a distinctly different monastery. The Chimi Lhakhang, situated on a hillock in the center of the valley, was built by Lama Drukpa Kunley. He subdued the demon ness of the Dochu-la with his ‘Magic Thunderbolt of Wisdom’. A wooden effigy of the lama’s thunderbolt is preserved in the Lhakhang, and childless women go to the temple to receive a `Wang’ (blessing) from this saint. It is a 20 minute walk across the fields from the road at Sopsokha to the temple.. There is a statue of the lama and his dog, as well as that of the Shabdrung, Sakyamuni and Chenrezig. The small chorten on the alter is said to have been crafted by Drukpa Kunley himself. Overnight in Wangduephordrang.
Day 5: WANGDUEPHODRANG / TRONGSA
Breakfast at resort.
Drive to Trongsa (129 kms/6 hrs). The route offers magnificent views of the Himalayas and beautiful landscape through scattered hamlets and forests of rhododendrons and pine. The town boasts of the most impressive Trongsa Dzong. The whole of eastern Bhutan was controlled from this fortress during the mid 17th century. Visitors are not allowed inside the building, but the outside walls are a beautiful sight.

Trongsa – At an altitude of 2200 m forms the central hub of the nation and is historically the place from where attempts at unifying the country were launched. The Royal family has strong links with Trongsa. Both His Majesty King Ugyen Wangchuck and his successor, King Jigme Wangchuck ruled the country from this Dzong.

Late afternoon, visit Trongsa Dzong built in 1648 is an impregnable fortress. The massive structure is built on many levels into the side of the hill that includes countless courtyards, passage ways and corridors in addition to the 23 temples inside the Dzong. Due to its highly strategic position, as the only connecting route between east and west Bhutan, the Trongsa Penlop (Governor) was able to control the whole region effectively for centuries from here. Above the Dzong, a Ta Dzong (watch tower) was built to watch out for invaders and travellers. Now it’s a temple dedicated to the great hero Ling Gesar. Overnight in

Day 6:TRONGSA / BHUMTHANG
Breakfast at hotel
Drive to Bumthang (68 kms/3 hrs) via the Chume Weaving center. Andrew Pulgar Frame, the present owner of Karmi Farm, is the grand son of Raja Tenduk Pulgar of an ancient Lepcha tribe and son of a Scottish father. Raja Tenduk Pulgar was looking for a place to own a farmhouse. He was trekking for days from Darjeeling and ultimately reached the place where the present farm is located. It was love at first sight and his search ended. He began farming here. Trekkers still follow the route Raja Tenduk had taken to reach Karmi Farm. It takes about 6 to 7 days of trekking through scenic landscapes to reach here from Darjeeling.
Continue drive to Bhumtang and check-in at the resort.

Bhumtang has an individuality that charms its visitors and separates it from other regions of Bhutan. Comprising of four smaller valleys, the deeply spiritual region of Bhumtang is shrouded in religious legends. It is also the traditional home to the greatest Buddhist teacher Pema Lingpa, to whose descendants the present dynasty traces its ancestry. Overnight in Bhumtang.

Bumthang, at an altitude 2600 metres has an individuality that charms its visitors and separates it from other regions. Comprised of four smaller valleys, the deeply spiritual region of Bumthang is shrouded in religious legend. Here tales of Guru Padmasambhava and his re-incarnation known as Tertons still linger in most nooks and corners. It is also known for its woolen material (yathra) which can be seen hung outside of houses for sale.

Visit the Jakar Dzong, 7th century Jambay Lhakhang, Kurjey Monastery, Tamshing and Kunchosum monastery. This sightseeing is a round trip so it is more interesting to do this on foot. Overnight in Bhumtang.

Afternoon: Tour of the cty, visiting the Tashichho dzong, the main secretariat building, which houses the throne room of His Majesty. This is also the summer residence of the Central Monk Body. Thimpu is a lively place and maintains a strong national character in the architectural style of its houses. Visit the indigenous hospital where the traditional old art of healing is still practiced, the Arts & Crafts school, the National library, the Royal goldsmith workshop and Handicrafts centers. Visit the Memorial chorten built in the memory of the late King Jigme Dorji Wangchuck and the 15th century Changangkha Monastery. Overnight in Thimpu.

Morning, visit the weekend market. Every Saturday & Sunday most of the Thimphu’s population and many valley dwellers congregate on the banks of the river where the weekend market is held. This is the only time in the week when fresh vegetables are available.

Paro, “The Beautiful Valley”. To the north, Mount Chomolhari (“Mountain of the Goddess”), reigns in white glory. The glacier waters from its “five sister” peaks, plunge torrentially through deep gorges, finally converging to form the Paro Chhu River that nourishes the rice fields and the apple and peach orchards of the Paro Valley. Paro is one of the most fertile valleys in the kingdom, producing a bulk of the famous red rice from its terraced fields, home to some of Bhutan’s oldest temples & monasteries.
Rest of the day at leisure. Overnight in Paro.

Day 11: PARO
Breakfast at the resort
Morning: guided tour of the town visiting the Rimpung Dzong, literally meaning ‘Heap of jewels’. This is situated across the river on the knoll that rises from the river, commanding a view of the Paro Valley. Today it houses the Paro Monastic Body. Behind Rimpung Dzong, high on the hillside, is the majestic castle-shaped Ta-Dzong. This one-time lookout and stronghold also played an active part in the defence of the Rimpung Dzong during invasions. It has been the National Museum since 1967. The Drukgyel Dzong – the burned out shell of the fortress of victorious Bhutan is 18 kms away from Paro. Kyichu Lhakhang, one of the kingdom’s oldest and most sacred temples and Dungtse Lhakhang are also centres of attraction.

Afternoon: At leisure to explore the town or to tale a long walk into the quiet coubntryside. Overnight in Paro.

Day 11: PARO
Breakfast at hotel
Morning: Proceed on an excursion to the Taktsang Monastery, literally meaning “Tiger’s Nest”, built around the cave in which the Guru Rimpoche – and later his follower Dubthok Singye – meditated. The monastery clings, to a rock face or cliff 3,000 ft above the valley floor. A visit to this monastery is a challenge and a pilgrimage; exhausting, thrilling and profoundly mystical.

(A terrible fire at the Taktsang Monastry a few years ago had caused much damage to the interiors, which has now been re-constructed. From the Takatsang Cafetaria, there are good views of the Monastry)

The hike to the view point of the Taktsang Monastery will take about 2 hrs. Horses can be arranged at an extra payment. The hike is all the way uphill through villages and pine forests. It is believed that the great Saint Guru Padmasambhava came in the 7th century on a flying tigress and meditated in a cave for 3 months. The demons were subdued who were trying to stop the spread of Buddhism in the Paro valley. At the end of the 17th century a monastery was built on the spot where the Saint mediated and it is a pilgrimage site for every Bhutanese to visit once in their life time.

Afternoon at leisure for independent activities. Overnight in Paro.

Day 11: PARO / DELHI
Breakfast at hotel
Morning departure transfer to the airport to board the flight for DELHI 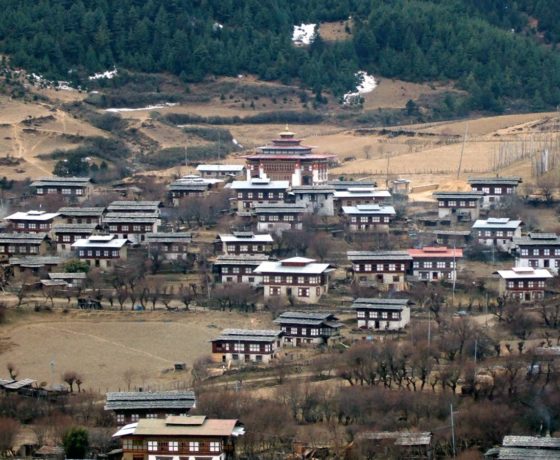 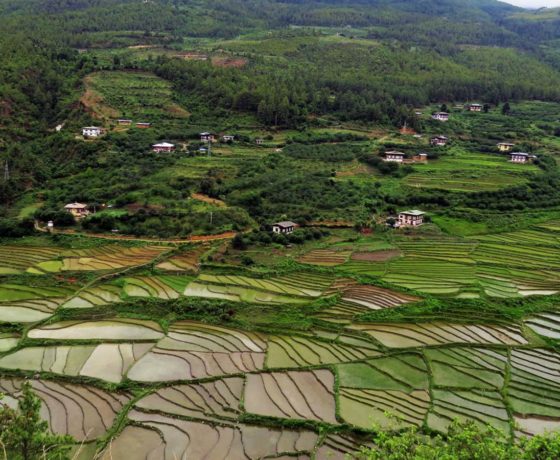 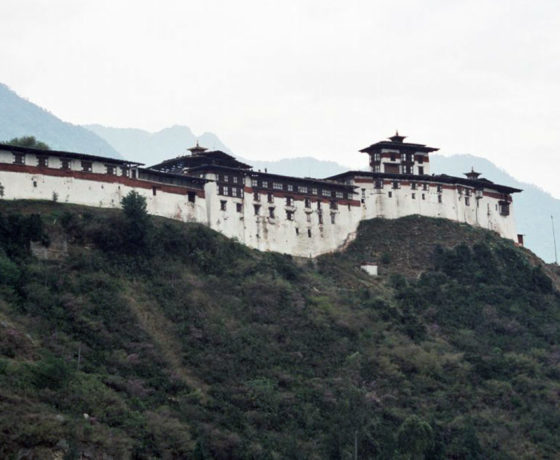 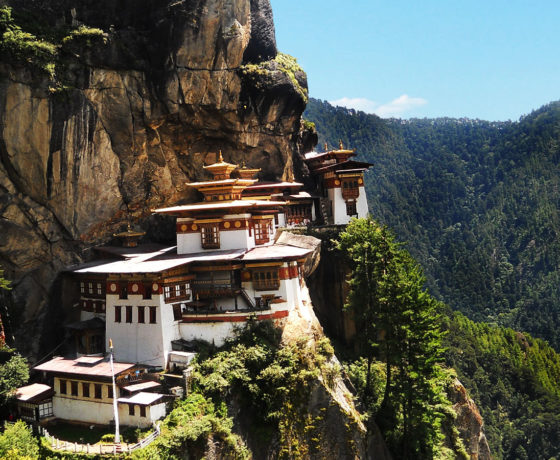 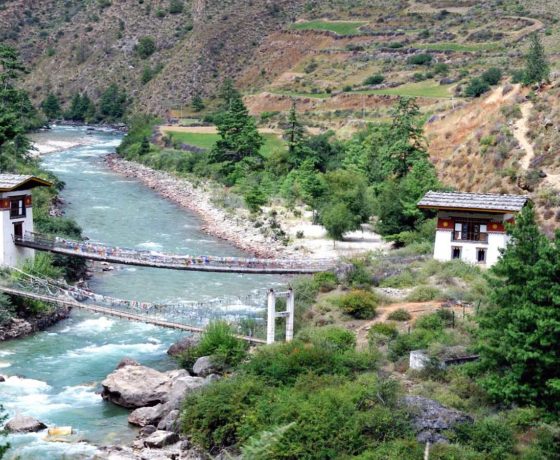 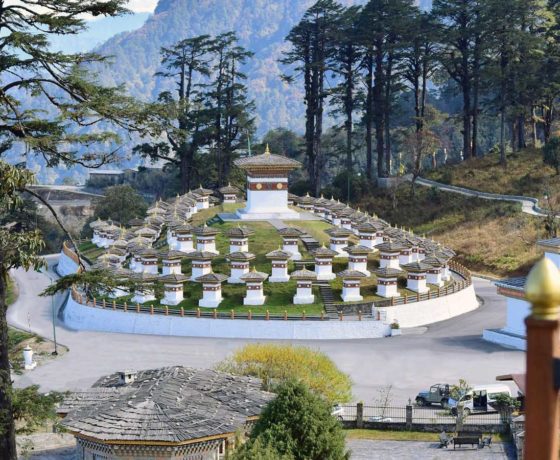 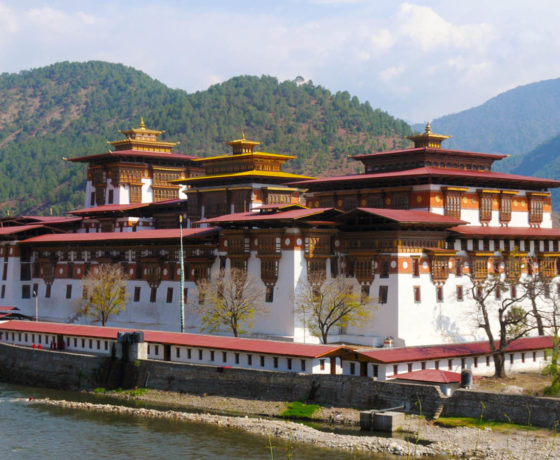